From the end of April 2018 to the end of May 2020, drilling work for Europe's largest inner-city geothermal project to date was carried out in Munich's city center on the site of the southern combined heat and power plant on Schäftlarnstrasse.

As early as 2008, Stadtwerke München launched an campaign to expand the use of renewable energy. The development of geothermal energy plays a particularly important role in this. Thanks in part to the favorable geological conditions in Upper Bavaria, SWM developed the ambitious goal of making Munich the first major German city to generate 100% of its district heating from renewable energy sources by 2040.

Since the beginning of the SWM campaign, ERDWERK has been a professional and reliable partner in planning, preliminary geophysical exploration, the tendering process, construction management including cost controlling and support in water and mining law procedures in the context of the extraction of geothermal energy by means of deep geothermal energy.

With its expertise and now more than 18 years of experience, ERDWERK has already played a major role in the success of the development of the geothermal reservoir in the Munich area in numerous other geothermal projects realized by SWM, such as Riem, Sauerlach and Freiham.

Initial assessments and preliminary planning were conducted by ERDWERK on behalf of SWM for the Schäftlarnstraße site as early as 2011 and 2012.

Subsequently, the depth and structural geology of the Malm reservoir and the overburden were explored in detail by intensive preliminary investigations using vibroseismic measurements, initially by 2D seismic and from November 2015 to March 2016 by 3D seismic in the inner city area of Munich.

ERDWERK was also significantly involved in the subsequent interpretation of the acquired data as part of the GRAME research project.

In parallel, the well production was simulated in different variants thermally-hydraulically as well as Geomechanically. The geological-drilling-technical detail and execution planning of the wells, carried out by ERDWERK, were the last essential milestones during the preparation phase before the project subsequently entered the execution phase.
After demolition of the large oil tanks and deconstruction of the site, the collection drilling site, including standpipe drilling, was built on the site of the southern CHP plant in Schäftlarnstraße by the beginning of April 2018. After erection of the drilling rig, deep drilling work could finally begin on April 25, 2018.

From the end of April 2018 to mid-April 2020, the drilling and testing of the six wells and a multilateral extension were successfully completed. The pumping tests confirmed the exploration expectations with regard to the parameters of flow rate and temperature. Highlights included the Th2aM1 multilateral development drilled as part of a research project and the installation of a fiber optic cable in the Th4 well for research purposes. Geological-technical problems occurred in the 3rd section of Th2. The stuck drill string could not be freed, whereupon a sidetrack (Th2a) became necessary.

The recovered heat is to be fed into the hot water networks of the inner city, Perlach and Sendling. For this purpose, the location on the site of the southern combined heat and power plant is advantageous, as it has a favorable infrastructure and grid connection. The cleared drilling site of the Munich-Schäftlarnstrasse geothermal site was handed over to the downstream contractor for construction of the above-ground heat exchangers on May 22, 2020. With a duration of about 2 years for the entire drilling and testing work, the ambitious schedule could thus be met. During this time, ERDWERK as representative for the client with a team consisting of geoscientists, reservoir engineers, drilling engineers, supply engineers and project managers continuously supervised the drilling and testing work on site as well as in the back office.

The Munich-Schäftlarnstrasse project is currently the largest deep geothermal project realized in Germany. With a total of six deep boreholes as well as a research multilateral development and a total drilling distance of around 25 km, the project is now setting new standards in the development of deep geothermal energy and will make a significant contribution to shaping the heat transition in Munich in the future. 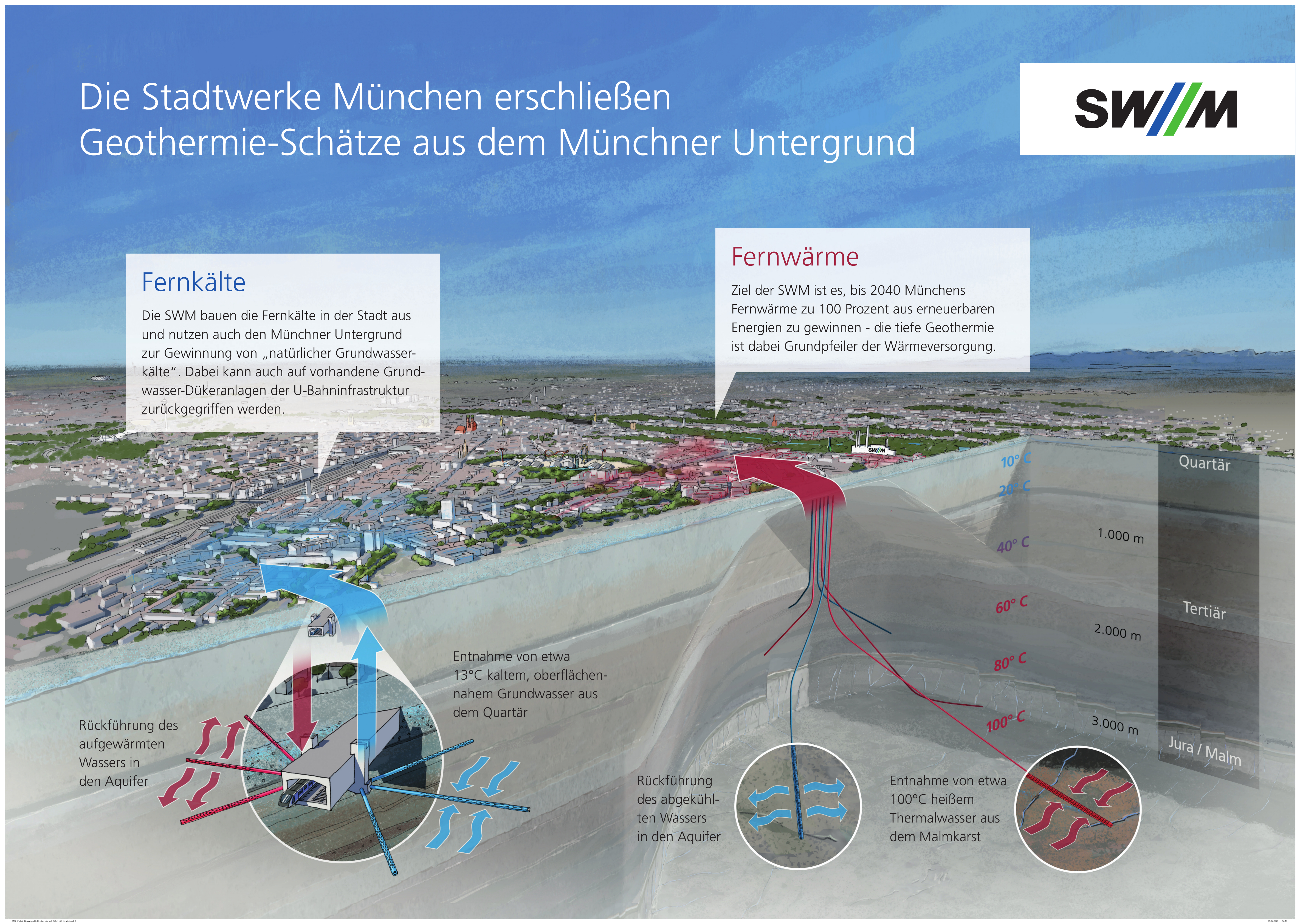