What does Geothermal mean?

Broadly speaking geothermal energy is heat energy found within and produced from our planet. However today, specifically speaking, geothermal describes the heat stored in the accessible parts of the earth’s crust, which is exploited for many purposes, such as heating or electricity production. The heat is continually supplied from the earth’s hot core to the colder surface.

How do you extract geothermal energy?

Depending on the depth and the applied technology geothermal can be divided into two areas, near surface geothermal and deep geothermal:

Near surface geothermal describes the use of the geothermal heat up to approximately 400 m depth through probes, collectors or ground water wells. Whilst the upper 10 m - 15 m of the earth surface is heavily influenced from yearly temperature fluctuations through solar radiation and penetrating rain water, the temperatures at greater than 15 m are much more constant. With the increase in depth the temperature increases on average by approximately 3 °C per 100 m.  Despite the relatively low ground temperature near surface, this region can still be effectively utilized with ground source heat pumps for supplying heat.

The majority of groundwater wells utilized for thermal applications are set to a depth of one to tens of meters. For efficient thermal use of the groundwater, the distance between the surface and the groundwater table must be as small as possible (a few meters) and have suitable hydrochemical conditions for long term use.

Today over 300,000 near surface geothermal installation exist across Germany, these installations comprise a range of setups from simple systems for family houses to larger complex systems for industrial or office sites with, for example, a series of groundwater wells or geothermal probe fields. In addition to their use as heat source, geothermal sources can be employed in summer for cooling. In this case the subsurface is employed to store heat or cold.

Alongside the above mentioned uses, further applications of heat stored in the near surface earth or rock includes direct use in winter to keep sensitive buildings and structures, such as bridges and train platforms, free from ice.

Recent pilot projects have also demonstrated the effective thermal use of heat won from tunnels, underground train stations and abandoned mine systems.

Deep geothermal refers to the thermal use of the underground from 400 m depth and deeper, with help from deep well drilling technology.

The use of hot groundwater or steam is defined as hydrothermal geothermal energy.

The south German Molasse Basin, the Oberrheingraben in the west and the north German Basin are recognized as regions in Germany with the most productive hydrothermal conditions.

Classical geothermal steam reservoirs (high enthalpy fields) do not exist in Germany. In Europe such fields exist in Iceland, Turkey and Italy. These fields have been utilized for tens of years and in Italy for over 100 years.

Fundamentally the same technology used in oil and gas is employed for drilling deep geothermal wells.

Geothermal wells typically differ from their oil and gas counter parts in the larger well size (diameter) and the demands on the casing due to the higher production temperatures.

The thermal water found deep underground is typically under high pressure, which means once the well has been drilled into the thermal water bearing reservoir, the water flows up the well by its self.

For example, the pressurized water table found within the Molasse Basin in south Germany typically sits tens to over 100 m below the surface. To bring this water to the surface a specialized pump must be employed. In some regions the water pressure is sufficient enough, so that the water flows to the surface (or higher) without the assistance of a pump. Such cases are defined as artesian pressurized groundwater.

A system which employs a production and reinjection well is called a “Doublet”.

A further type of deep geothermal system is the so called Enhanced Geothermal System (EGS). The structure of dense, not porous, geothermally hot rock at some kilometers depth is changed through hydraulic stimulation processes (hydraulic fracturing). This introduces fractures and thus increases the porosity. The technology is currently in the research stage within Europe. The European Pilot Project Soultz-sous-Forêts in France has been in operation since 2008.

A modified form of hydrothermal use is the seasonal high temperature reservoir storage. During the summer months excess heat generated by factories or power stations is stored at depth in a groundwater reservoir. During the winter months the heat is extracted for heating purposes. 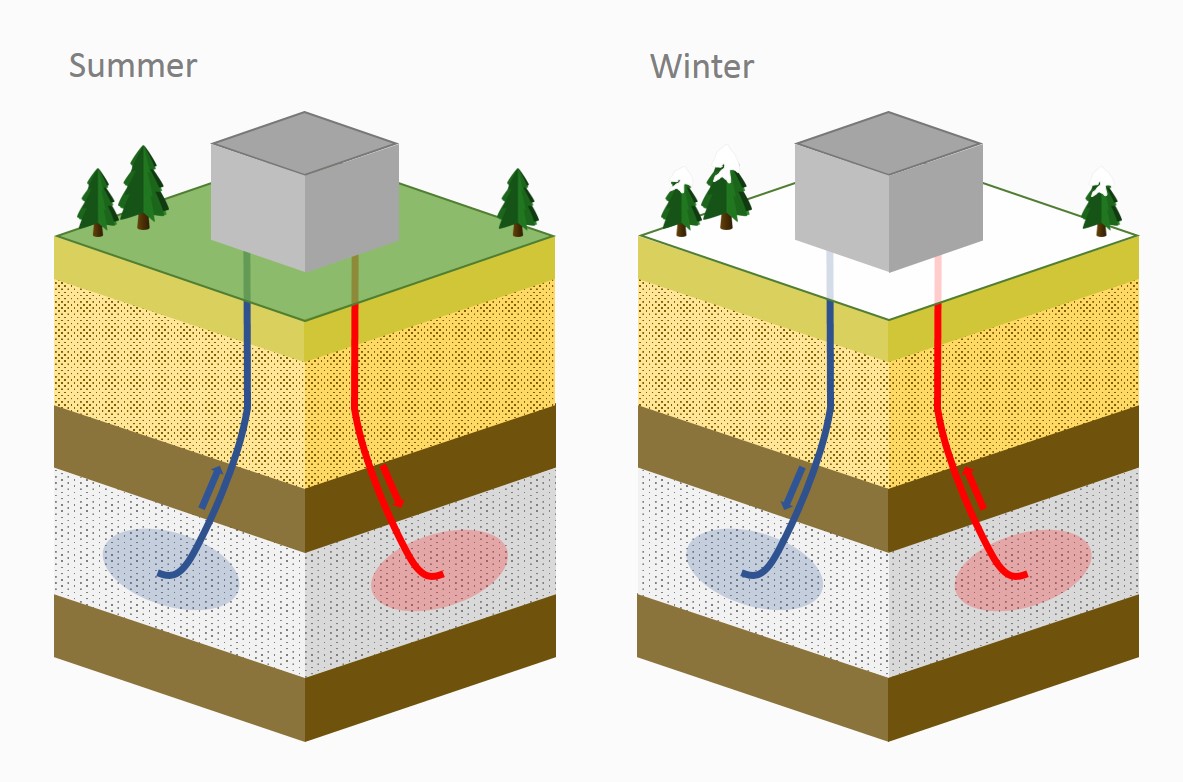 Prior to drilling the deep wells the subsurface is characterized and analyzed. The method is dependent on the geological conditions, but includes, seismic, gravity or magnetic surveys.

The following lists a number of advantages of geothermal energy, with emphasis on the effectiveness of deep geothermal:

The biggest advantage of geothermal use is that it is an environmentally friendly, season independent and constant energy source. The space requirement of a geothermal energy center or power plant is comparatively small. When the district heating network and energy center are in place, not further routine transportation to the site.

The following advantages are from the perspective of the end user:

- No potential fire or explosion danger (in contrast to oil or gas heating).

- No odor issues due to oil tanks.

The following advantages are from the perspective of the regional authority:

- Added value to the region

- Independence from traditional energy suppliers (also from a political perspective).

- Provide an affordable and price stable heat supply for the community.

- Regional control of the energy supply.

- Long term investment in the infrastructure for future generations.

- Increase in attractiveness of region. For example for developers and industry with process heat requirements.